To those who know me well, it won’t exactly be news to read this. They’ve heard it all before. They even love me for it. However, for those who don’t, here it is.

I, Clare, don’t fit in. Anywhere. Never have done; never will. The only place where I feel remotely at home is with other people equally as estranged as myself. Even then as some kind of group gradually forms, I never fully feel part of it.

Welcome to the human race, I hear you cry.

I’ve tried on various identities throughout my life (as though they were ill-fitting raincoats or top hats). And I spent the first twenty years of my life feeling lost as to what my identity might even be. It was only when I became Buddhist that I began ‘exploring’ different sides of myself. I ditched my long black skirts for sky-blue dresses stitched with swirls (gazing at them helped me slip into blissful, meditative states). I went on the road with like-minded people. I experimented with ‘open relationships’ (placing values of ‘freedom’ and ‘letting go’ above the humiliation of having to smile at parties like someone had just stuck a fork up my arse as my beloved seduced some hippy dippy chick with perfect tits.) I saw Buddha nature in everyone. Made 'spiritual' friends. 'Found’ myself. Lost myself. Found myself again. Then I realised - I still don’t sodding fit in. 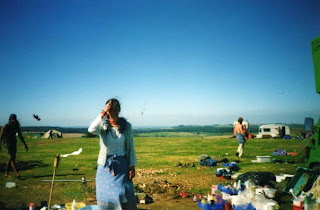 Within the Buddhist movement in which I was involved, I was encouraged to give up my name and my personal vision, supplanting it with another, greater one. I could be an individual as long as I took on board someone else's interpretation of Buddha's teachings and swore my faith on it. A big part of me wanted this. But I was still, on some level, doing as I was told. And I was doing it alongside people who at best possessed grace and compassion as well as insight into their own and others' lives, but who at worst were nutters you wouldn’t have given the time of day to had they not been wearing a skull mala or able to harmonise brilliantly on a Vajrasattva mantra.

So I left and became ‘an artist’ - a writer. Maker of music. Poetry scribe. I kept going with the fucked up relationships but moved into a flat on my own where I no longer had to put up with people’s rows about veggie sausages or Tantra or why one person had 'inadvertently’ shagged the other's boyfriend. I shut my door - the world and Enlightenment could fuck right off.

It’s a shame about loneliness. And it’s a shame that being ‘an artist’ brings with it all the same bullshit everything else does. I replaced a genuinely deluded idea that I could escape the pain of being alive by getting Enlightened with a genuinely deluded idea that I could transform that pain into great stories and poems that would bring me a purpose in life (and an income). That I’d fit in somewhere – into the world of books and writers. Hey, I’d make songs and maybe I’d become some kind of pop diva (even if my songs were about sticking ex-friends in freezers, burning down cities ,and ‘deep-throating’ large mulberries). I’d find my place – not in renouncing the world, but in reclaiming it for my very, freaky own.

Oh dear. I spent five years filing my poems away, writing a blog read by approximately 3.5 people and performing, ooh, at least twice. So then I decided on something else. This time I wasn’t going to shy away from the very thing I’d kept at least half-shoved in the closet most of my life. 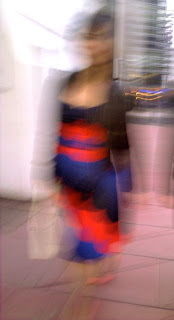 I’m a North Welsh woman who grew up on the border with England. I’m from a rich family but my parents came from poor working-class backgrounds. My Dad never gave me a penny of his money and my mother’s last job was as a cleaner but I went to a private girls' school. I’m intelligent but rubbish at pretending to be clever. I’m pretty but getting old. I am disappointed by men, and fear women. I am a Buddhist who believes in God, a closet Catholic who can’t stand the Church. I fancy girls with guns and boys who play banjo. And yes, I realise they are cliches. I fancy cliches too. Oh, and I fall most passionately in love with people who are dysfunctional and creative and generally confused.

And my next identity move? Living as someone who is motherless and, essentially, fatherless as well. Living as someone who is thirty-seven and childless, broke, living in rented accommodation and trying to make it as a writer of some integrity. Living as an epileptic - assimilating that into my life and taking what I can from it that makes me a more interesting individual - living with the vision it gives and the dark places it takes me to. There’s nothing like 24 volts of electricity surging through your brain to make you even more convinced of life’s instability, and at times, of its wonder.

Life is a series of ‘Over the Rainbow’ moments (and I'm not talking about the TV programmme). So here's my advice - watch out for the witch with the green face, but watch out even more for the one who looks like Dorothy. Follow that yellow brick road, even if it is leading to a place that doesn’t exist. And don’t worry too much if you end up rolling around awhile in a field of poppies. They smell great and we all need to get high sometimes, somehow.

You can trust Toto.
Posted by Clare at 9:13 PM No comments:

If You Tolerate This Your Children Will Be Next

Email ThisBlogThis!Share to TwitterShare to FacebookShare to Pinterest
Labels: Click the Title, Don't Let The Tories Back In, Whatever You Do Today
Newer Posts Older Posts Home
Subscribe to: Posts (Atom)